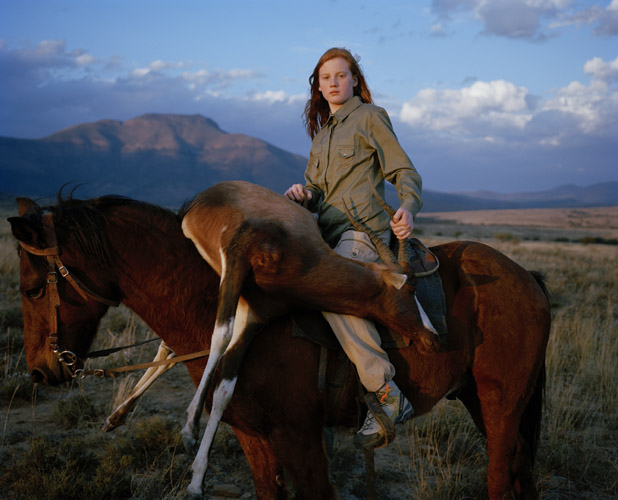 Huntress with Buck, by David Chancellor

Late last year I visited the National Portrait Gallery in London to see the annual Taylor Wessing exhibition and prizes for portrait photography. The winning photograph was Huntress with Buck by David Chancellor, a Briton currently living and working in South Africa. It is one of a series of portraits of people involved with hunting.

I was captivated by the photograph and made contact with David to buy one of the edition which I am pleased to say we now finally have in place. The photograph is a haunting combination of female innocence and power in an image of a modern day Diana, goddess of hunting.

This is what David told me about the picture: “Josie was 12 years old when I met her. She is from Birmingham, Alabama, USA.  She is an experienced hunter, and rider, and had come with her mother and father, also experienced hunters, to South Africa to hunt her first African animal. I spent two days with Josie and her family documenting their hunt, this is normally the way I work, it’s hugely time consuming but I learned very quickly that you simply have to be there. The opportunities are brief and intense and it’s impossible to duplicate them later. I’ve worked a great deal with Josie’s professional hunter and he’s comfortable with me being around, and visa versa. I will always explain who I am and what I’m doing and then usually not speak with the hunter again until I see something I want to do, this will usually, but not always be after a ‘kill’. In this case Josie had hunted her buck earlier in the day and was returning to camp, it had been overcast all day and until this point I’d been particularly uninspired by what I shot and very aware of the fragility and beauty of Josie and the passing of light and with it opportunity. I had shot a tracker with a buck previously in this location, also on horseback, that worked but I felt Josie would be much stronger, there was a vulnerability and yet also a strength that I wanted to explore so we headed to the same location and as we arrived the sun set below the cloud cover and for approx 1 minute I had almost unreal light. The ‘pose’ is pretty much Josie’s, I don’t really think she was even aware of how she looked. I will control the situation if I need to, there is usually so much adrenalin pumping through the hunters veins particularly with dangerous game that I have to, on this occasion I didn’t need to do much, the contrast between the peace and tranquillity of the location, the ethereal beauty of Josie, and the dead buck was what I wanted to explore. The horse is significant in as much as it allowed her to sit in an elevated position, grand and statuesque evoking the iconography of the goddess Diana who was often portrayed in mythology accompanied by a deer ….”

I think it is a fabulous photograph which will really stand the test of time and I am delighted to have been able to acquire a print.

This entry was posted in Uncategorized and tagged Photography. Bookmark the permalink.

1 Response to Huntress with Buck