Our cattle go to market, or not 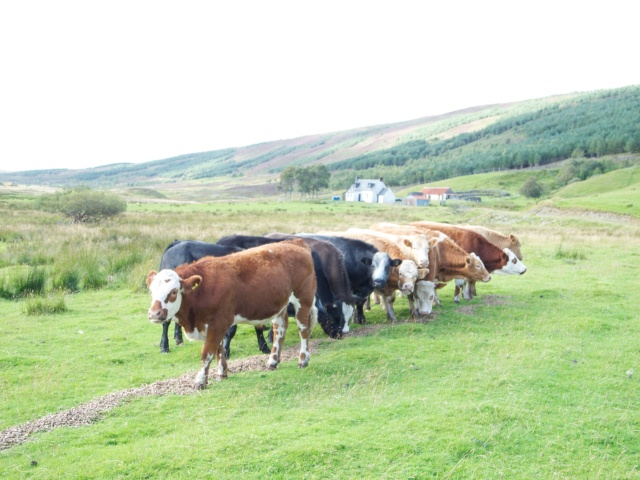 We sent our cattle to Dingwall Mart last week. Unfortunately I was not able to attend, but they did very well. The whole process though was  not without incident.

We buy a group of stots (eg bullocks) every spring to help with grazing on the strath. They spend some of the time on rough ground, and some on the better grazing. They don’t get much in the way of nuts or silage, but just enough to ensure that they will come to where the feed is. Otherwise, rounding them up and putting them on a truck would be nigh on impossible. It sometimes is anyway …

We had 15 stots this year, and from the very start Ali had identified one of them as trouble. They were gathered as usual into a strong timber corral we have built for the purpose, and which we have used successfully for several years. From there 14 were loaded onto the trailer, not without the usual difficulties, but the fifteenth was not for going in. Eventually she got angry, reared up, came down on the sides of the coral which she burst open and made good her mistake. So now she is loitering in the strath, unwilling to approach anyone. She has fed in the corral once, in the dark, and so we shall have to see if we can use that fact to capture her again.

The stots we did send to market did very well. On arrival their average weight was 305.8 kilos. At the Mart they weighed an average of 465 kilos. So we made a reasonable return this year, helped by strong cattle prices. It is the first proper return for three years.

By the way, we usually send one of the stots to the abattoir to provide beef for the next twelve months. No prize for guessing who is going to the abattoir this time. I’ll update when we have finally rounded her up.

This entry was posted in Uncategorized and tagged Cattle, Dingwall Mart, farming. Bookmark the permalink.