Great though the stalking is at Croick, it is good on occasion to try different ground. So on Monday we went off for a day’s stalking at Rothiemurcus Estate in the Cairngorms. The keeper there is the excellent Peter Ferguson who took me for my first ever stalk on a neighbouring estate many years ago.

Rothiemurcus is a high ground estate (we go shooting ptarmigan there earlier in the year) and so we knew we would be for a walk ….. we weren’t disappointed. We arrive on a cold day with the wind in the north and low cloud covering the tops. But at least it wasn’t raining. We headed out towards Loch Einig spying small numbers of deer on the way. There were a number of stags spread across the face but it was immediately clear that they were going to be difficult stalks. The deer were high and the faces are pretty open so there is a shortage of cover. 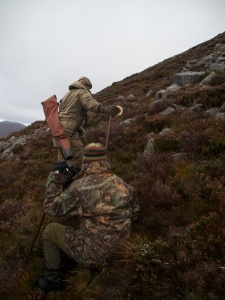 We chose a potential target and started to climb. Indeed we would be climbing until lunchtime, ending up walking through the first light covering of snow we had seen this year. I’m not sure quite how high we climbed but when we stopped for a quick lunch break we disturbed a cover of ptarmigan in their full winter plumage.

Before we had started we had watched some walkers pack their tent and head on down the track towards Aviemore. But as we climbed we realised they had turned off the track and were heading into the ground we were planning to stalk. Most of the deer we had spied would be disturbed and only the nearest stag we had seen would probably be left. And he was probably the most challenging to reach undisturbed. As Peter said “Right, I better concentrate now”. (Well he made a few other comments too, but I’ll leave those to your imagination).

Soon after lunch we started to get close enough to the stag to confirm that he was shootable and had about five hinds with him. As we considered our approach we saw some other young stags ahead of us, blocking our approach. We gently moved them on but our target spotted the movement and moved gently on along the hill. But a deer’s gentle movement is tough to keep pace with.

Eventually they settled, we found them and started our approach. This was the longest crawl I have ever had. It seemed like half a mile but was certainly 3-400 yards. And to make it as enjoyable as possible it started to snow heavily as we crawled. Indeed when we got to a small knoll which we felt was as close as we could get we could see nothing and had to wait for the snow to clear. Eventually it did clear and we saw the stag lying in the heather, looking away from us, about 200 yards away (well, exactly 200 yards away according to Peter’s range-finding glasses).

The next bit was a bit messy. In an ideal world we would have waited for the stag to get up before taking a shot. But we were all very wet, getting cold and not really in the mood for a prolonged wait. So I decided to place the shot in the back of the neck. The shot hit home but (as we subsequently discovered) just missed the spine. The stag leapt up and started moving away. A second shot brought it down but was too far back to close out the issue. A third shot did that. I would obviously have preferred to have made the first shot count but when we subsequently looked at the shot I was frankly amazed that the stag had ever moved after that.

Whilst this drama was playing out, the sun had come out. So we had sunshine for our long walk back to the vehicle and by six o’clock we were in the larder celebrating a very enjoyable day. For those who like their stalking to be on the strenuous side, I can thoroughly recommend Rothiemurcus.

1 Response to Extreme stalking at Rothiemurcus