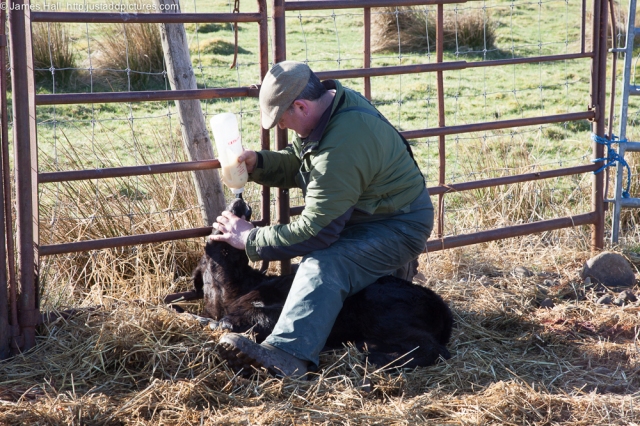 Bottle feeding a new calf with her mother’s milk

This is the first time I have been directly involved with calving cattle. It is not without drama, and probably not for the faint-hearted.

The theory is that our cattle are robust, outdoor cattle and good calvers. Left to themselves they will calf on their own and instinctively know how to mother their new calves. Sometimes it works out like that but, inevitably, it is often rather more complicated. Our cows are all calving for the first time and we seem to have been blessed with some particularly large calves.

Two days ago it was clear that one of the cows had been calving for quite a long time, but not making any discernible progress. We decided she needed some help. She of course didn’t know she needed help, and wasn’t at all convinced. It took us a long time to persuade her to be walked into the pen. In the end, it was of course food that got her there, along with a number of her friends. We then had to get her friends out and persuade her to leave the pen through the cattle crush were we could hold her secure. I should think this took the best part of a couple of hours.

Once in the crush we could examine her and her new calf, whose front feet were just starting to show. Fortunately is was her front feet; the calf was presenting the right way. Tying rope to the two feet we tried to pull the calf free, but it was not for moving. This is where the cattle jack comes in. The jack is a rather fearsome piece of equipment which rests against the rump of the cow and allows you to fasten the ropes to a jack and ease the calf out. It doesn’t sound great, and it doesn’t look great either; but the alternative is losing both the calf and most likely the mother. And it isn’t made any easier if the cow decides to try and sit down half way through the operation.

This cow had the most enormous calf and it tooks us quite a few minutes to complete the process. The calf was very still afterwards and struggling to take breath. We were afraid we might loose him but fortunately he came to. Twenty fours later our concern was that he had not mastered how to suck, or perhaps his mother had not mastered how to allow it. We had to get his mother back in the crush so we could milk her and bottle feed the calf. 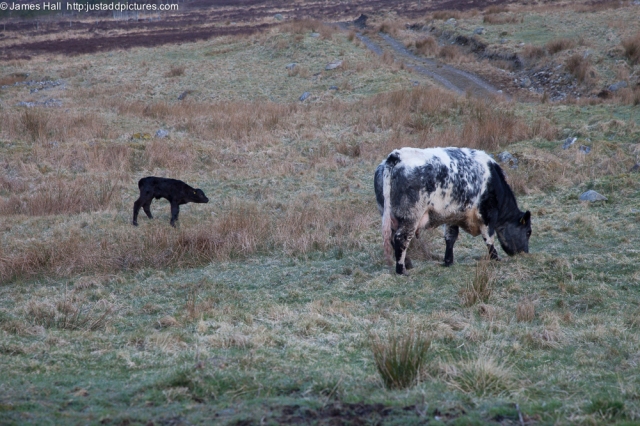 Mother and calf, about 36 hours old

Yesterday we had a rather bigger drama. The next cow was calving but she would not settle for long and through the binoculars we could see a pair of feet emerging. Worse still they were rear feet. The calf was presenting backwards which immediately cuts its chances of survival dramatically.

This cow really did not want to come to the pen. It took more than four hours of various strategies, with the feet protruding throughout. Eventually we got her to the pen and into the crush. I think all of us assumed we would be removing a dead calf to save the mother. The jack was deployed, the calf removed as quickly as we possibly could. To our amazement and delight it was a heifer, very much alive, and trying to stand up within ten minutes of being born.

The mother was much more shaken by the process than the calf and she had sunk to her knees during the birth. It took us a good 30 minutes to her her back on her feet and with her calf. This morning mother and calf both seemed to be fine though we have yet to see evidence that she is suckling.

Oh, and by the way lambing continues throughout. It just as well we have help and volunteers!